Our client is one of Europe’s leaders in the source, supply and distribution of high-quality food commodities to customers in the food manufacturing industry. It has a national and European coverage with its products deployed via a network of major warehouse depots.

On 29th August 2020, a large fire broke out in the organisation’s large distribution centre in Basildon that would call on Express Solutions Group’s vast expertise and resources to manage the large-scale fire and spill crisis response, control contamination and protect the environment. This emergency assignment drew on all our specialist expertise to reduce the impact of the emergency on the organisations’ core operations, on business disruption to neighbouring sites and on the local environment.

Express Solutions Group Disaster Management Team was commissioned to attend site on a demanding 24-hour fire, spill and environmental assignment that would prove operationally complex and challenging and within particularly hazardous working conditions. The timescale was also a formidable factor; with downtime costs amounting to £1.2 million per day, the neighbouring site had tasked our client with ensuring its facilities would be operational within just 24 hours. 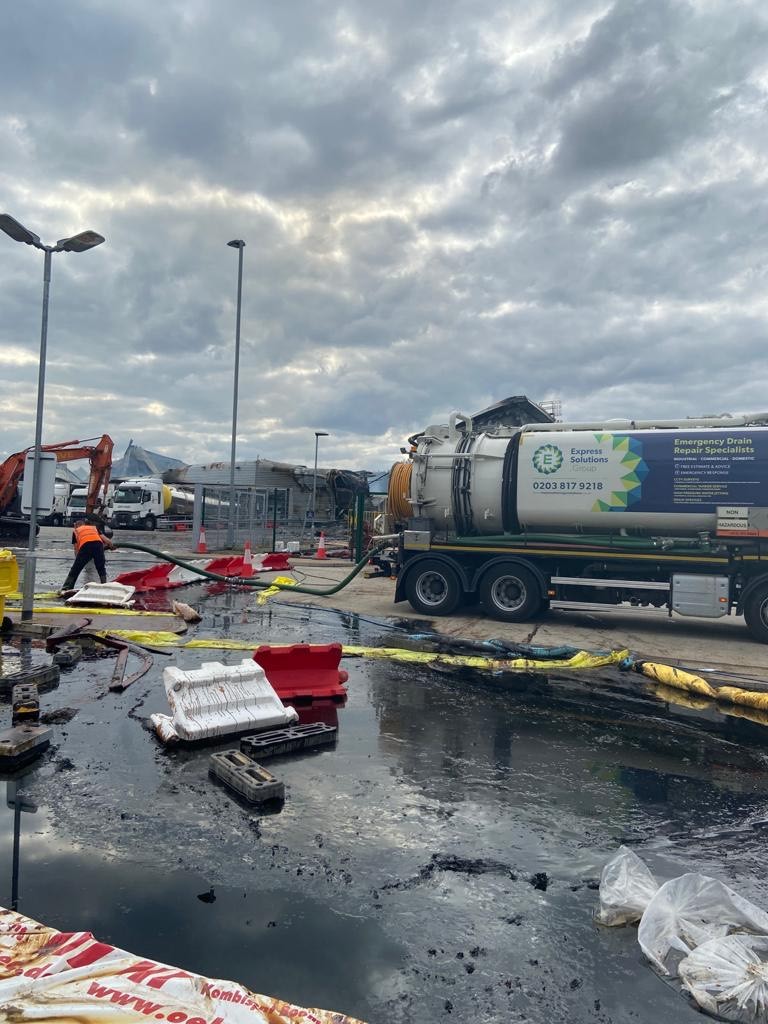 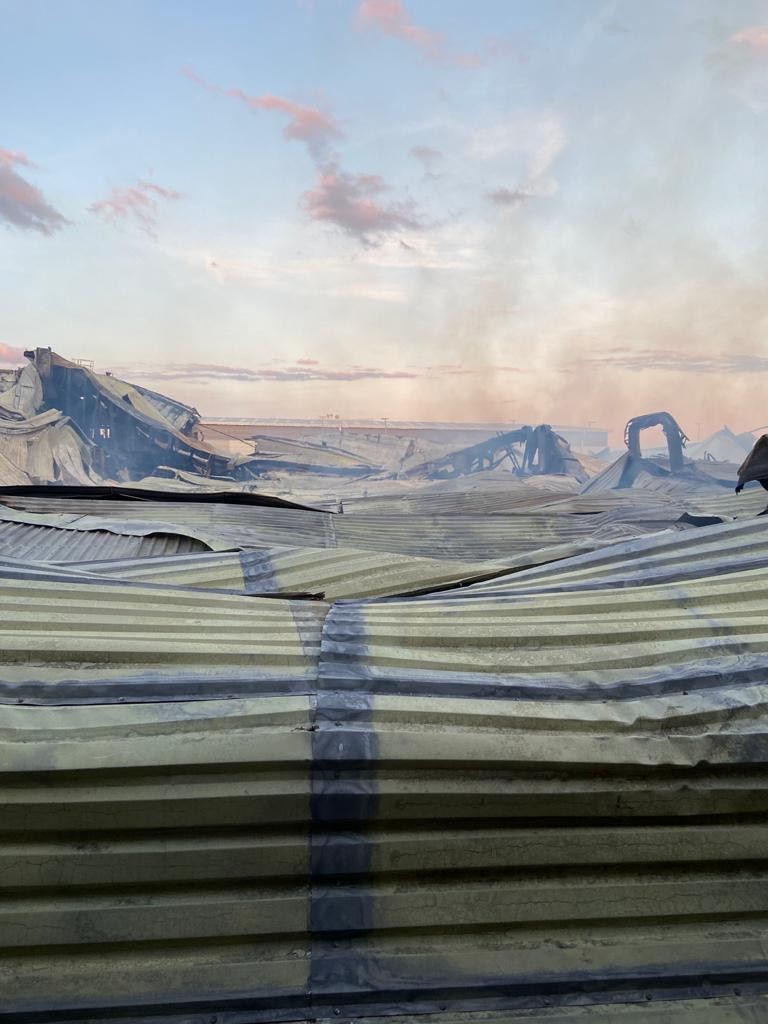 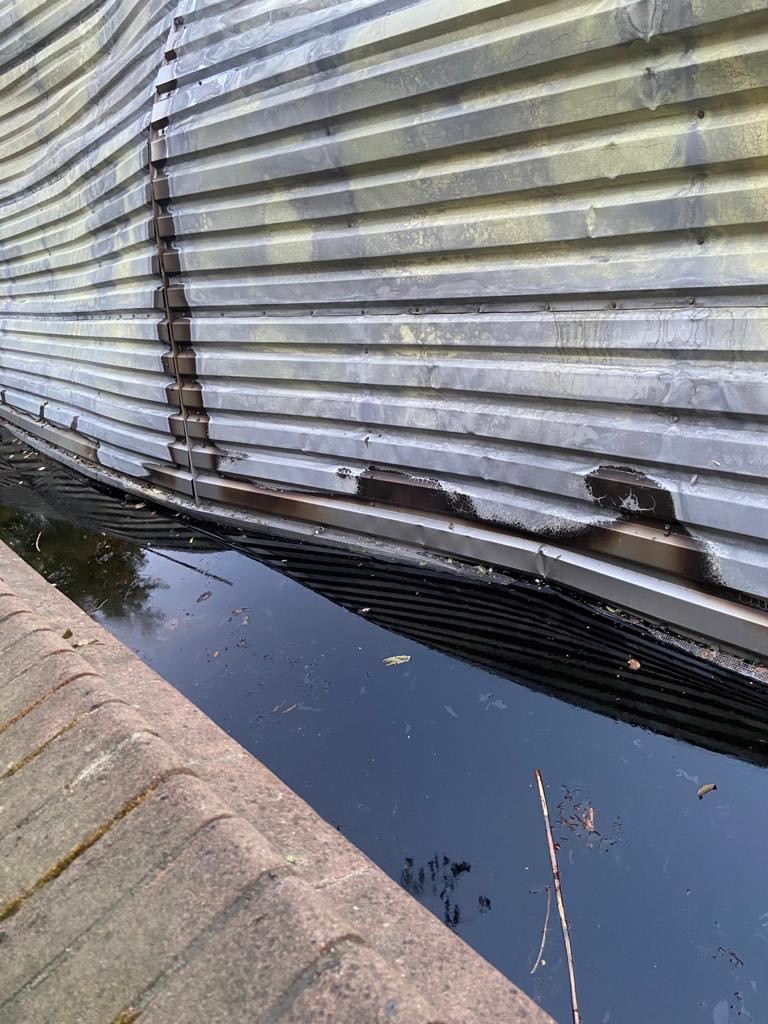 The fire was to have a catastrophic effect on the vast quantities and nature of some of the food products stored on the site – these included 150,000 litres of vegetable oil, 100,000 litres of liquid syrup and 60% of the largest sugar supplier’s granulated stock. The result was a molten syrup that had spilled across the site and into the neighbouring premises and was already beginning to solidify. The subsequent hazardous contamination and blockage of the local drainage network and on into an adjacent dry ditch couple with the fire brigade’s use of spill kits were to prove the most challenging aspects of this crisis management solution.

Due to the scale and nature of the spill, it was necessary for the neighbouring site, the world’s leading prime parcel delivery and logistics provider, to temporarily cease operations. With up to 60,000 parcels being shipped each day, the closure would have a catastrophic operational and financial impact on its business. However, since the business was already an Express Solutions client, we were able to agree the neighbouring site would be ready to resume operations safely and effectively at 6 am the following day – less than 24 hours after arriving on site. Nonetheless, managing such a large-scale crisis within a hazardous working environment under such restrictive time constraints would prove a demanding task.

The Express Solutions Group Disaster Management Team was mobilised on Monday morning and, following an initial assessment of the site and surrounding areas that revealed the extent of the contamination and blockage to the drainage network, we devised a four-point schedule of prioritised work, which was agreed with the Environment Agency, and implemented as follows.

Express Solution Group’s drainage engineers and crisis crew members worked through the night to clear the molten syrup that had begun to solidify, hampering removal efforts to remove it. The teams deployed a combination of high-pressure water jetting, plant equipment and grit to remove the hardened surface layer followed by the molten syrup and residue.

Some 19 hours after the Disaster Management Team’s arrival on site, the entire site was cleared, the neighboring business had resumed operations and an estimated 18,000 liters of hazardous waste had been removed.

On the second day of the fire, spill and environmental crisis management operation, the team focussed its efforts on the incident’s off-site environmental impact. Monitoring and extraction of hazardous waste from the drainage ditch continued resulting in the safe removal and disposal of an estimated 40,000 litres of contaminated storm water. In the meantime, the Environment Agency confirmed that various locations within the connecting watercourse had been contaminated and asked that booms were distributed to collect the leaked oils and syrup.

We reduced the very high levels of hazardous waste in the neighboring site’s storm line by extracting it from the interceptor, which continually backfilled the line from an attenuation tank. A combination of plant, high-pressure water jets, tanker extraction and sand were used to dispose of the bulk waste in skips.

Contamination extraction and monitoring continued with a further tanker commissioned to accelerate the process as further investigation revealed contamination in a boundary area. We deployed a crawler CCTV unit, dug a secondary trial pit and, when it began to fill with contaminated product, we obtained approval for Aqua Dams to be installed to cleanse the area and remaining car park and, later to be installed at all high-risk contamination points. Extraction created additional capacity for more storm water in the event of further rain and a sand dam was built to prevent run off.

As our fire, spill and environmental operation concluded, the site was signed off in the agreed condition. We left essential equipment on-site to fulfil our recommended contingency arrangements and provided a contingency plan to both our client and the neighbouring client to follow.

The critical remit to ensure our client’s neighbouring site would be operational within just 24 hours of our arrival on site was achieved in only 22 hours. Express Solutions Group Disaster Management Team had successfully ensured its activities were resumed with minimal disruption to business and millions of pounds in downtime costs saved.

Don't forget we blog too!

Ready to have a conversation?